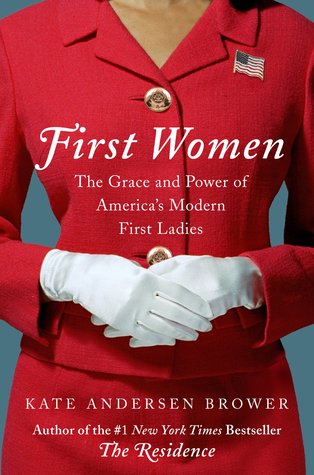 It took me a little bit to get through this one, but Kate Anderson Brower’s First Women: The Grace and Power of America’s Modern First Ladies provides a fascinating look into the lives of some of the most well-known women in the United States. Of course, while they are often infamous simply due to their political stature, we often on’t think about their real lives and what being the First Lady really means.

I mean, yes, obviously it means that your husband (in most cases) is President of the United States. And you get to live in the White House, which seems like it would be incredibly neat. But upon reading this book, you start to think about how it could be a little bit lonely. You’re both very isolated and very much in the public eye at the same time. You have to attend all these huge events, like State Dinners and things, but you can’t even take a basic trip to Target. (Something I, a ‘normal’ person, clearly take for granted.)

Of course, it also touches on how much these women often fear for the security of their husbands and of their families – something you may not really think about all that much. But can you imagine having your significant other be in the biggest, most public position in the United States, and honestly never knowing if they’ll come home from a meeting or public event alive?

Overall, this book was a great view into the lives of these powerful women in United States history, as well as their relationships with each other and influence on their husbands. It also talked about the White House itself and how each family has put its own decor into it – and how the moving-out process works as well. I can’t even begin to imagine how difficult it was for Jackie Kennedy moving out after JFK’s assassination. At the same time, I can’t imagine how challenging the transition must be the families who spend a full four- or eight years living in the White House and then have to return to “normal” life.

This book was published in 2016, making it incredibly up-to-date. It really focuses on many of the more modern or recent first ladies, including Jackie Kennedy, Pat Nixon, Hillary Clinton and Michelle Obama. I think that’s what made this such an enjoyable read; though I wasn’t around when a lot of those women were (I’m a 1990 baby), I certainly am familiar with Clinton and Obama.

One of my favorite pieces of the book, other than the story about how badly Michelle Obama just wanted to go to Target, was this line about President George H.W. Bush in a paragraph about how some of the families have a hard time readjusting to nromal life:

First families can become so out of touch with normal life that, for example, President Reagan quipped that he might not remember how to turn on a lamp after he left the White House. President George H.W. Bush was famously mocked during his 1992 reelection campaign after he marveled at a supermarket scanner.

If you’re at all interested in politics, or even if you aren’t — this book is a great read, so pick it up and give a chance! It’s an especially interesting read when considering the current political climate of the United States.